Salisbury, NC - In an effort to prepare students for the rapidly advancing technological landscape, North Hills Christian School has announced the implementation of a comprehensive STEM program.

The program, which stands for Science, Technology, Engineering, and Mathematics, will be integrated into the school's curriculum and advances their holistic approach of equipping mind, body, and soul. Using a hands-on and project-based approach, students will have the opportunity to work on real-world problems and projects including coding, robotics, AI, app development, and more.

Mr. Joey Lloyd has been announced as the school’s STEM Project Coordinator in addition to being the Middle School Science Instructor. Mr. Lloyd has extensive experience in implementing STEM programming. In addition, he has a Bachelor of Science degree in Meteorology and a Master’s certificate in Science Education. In 2018, he was awarded the North Carolina District 6 Science Teacher of the Year.

"Our school’s mission is to equip the hearts and minds of students to impact the world for Christ. By fostering a love for STEM subjects, students will now have more tools to make an even greater impact," said Upper School Principal, Dr. Chris Crabtree.

The first project that STEM students will be working on is the implementation of 10 Temi Robots which were purchased through grant funding received from the state. North Hills has the distinction of being the only school in North America that will be using these robots.

Temi is the world’s first, truly intelligent, mobile, personal robot. Temi places users at the center of technology, including smart devices, online content, and video communications harnessed by the power of voice and hands-free. The robots feature state-of-the-art AI, and a system of sensors and cameras.

"We are thrilled to be able to offer our students such an exciting and valuable program," said Dr. Crabtree. "We believe that this will have a positive impact on not only our student's academic achievement but also on the community as a whole as we will be helping to develop the next generation of STEM professionals equipped with a biblical worldview."

Forty-two of North Hill’s 475 students have been initially selected through an application process to participate in the first course offering which will begin as an elective held two days per week. The school is also currently developing plans for a state-of-the-art STEM lab to be built on campus in the near future.

North Hills Christian School is a non-denominational college-preparatory Christian day school serving over 470 students in junior kindergarten through 12th grade. It is fully accredited by the Southern Association of Colleges and Schools (SACS), a division of AdvancEd, and by the Association of Christian Schools International (ACSI), an internationally respected organization that is recognized by the North Carolina Division of Non-Public Education. A few NHCS students celebrated a big win over the summer.
Meera Ivester graciously provided us with the following information on the event, ‘The Big Rock’ tournament.
______________________

It's a 'Done Deal' for the winners of the 2nd Annual Kids Big Rock!
https://www.thebigrock.com/done-deal-wins-2nd-annual-big-rock-kids/

Myles Ivester is a 6th grader and Mikey is a 3rd grader!
We joined the North Hills family in Myles' 3rd-grade year [2019-2020] and Mikey's Kindergarten year!

Our boys have been fishing since they were old enough to stand up and hold a rod.  Mainly in our ponds, some lakes, and inshore fishing at the beach.  Their Dad, Michael Ivester, Jr. has been offshore sportfishing and waterfowl hunting since he can remember with his own father, the boys' Papa, the late and great, Mike Ivester, Sr.  The boys' mother, Meera, has been sportfishing offshore with Michael for over 13 years.  Safe to say it's all in the family!

Our love for Morehead City, NC over the years and the sportfishing community there led us to finally make the decision to invest in the sport of Tournament Fishing and make these memories with our boys, family, hardworking employees, and our very best friends!

Dad has been fishing the Big Rock tournament along with many other tournaments for close to 5 years now.  The Big Rock is considered the 'Super Bowl' of fishing tournaments.  Dad actually won the 33rd Annual Ducks Unlimited tournament last year in the Heels N Reels.

Mom eventually began her own team for 4 years, fishing in the Kelli Wagner Lady Angler tournament, which is one of the largest ladies-only events in the world; an all-charity breast cancer awareness event held the weekend before the Big Rock in Morehead City.

Last year, the prestigious Big Rock tournament added a Kids division!  So we were thrilled to introduce this to our boys!  Myles ended up placing 8th in the Wahoo division in the very 1st annual Kids Big Rock.  This victory was fished with our amazing crew and our 1st mate, Paul Sutton's son, Noah Sutton [rising 5th grader].  Oh, the memories these kiddos have been making!

We came back this year and words cannot describe the perseverance, determination, hard work, focus, and discipline followed by sheer excitement just by getting through these long days...let alone accomplishing goals that many never expect whatsoever.  By God's grace, all boats went out did their best and safely returned to the landing. 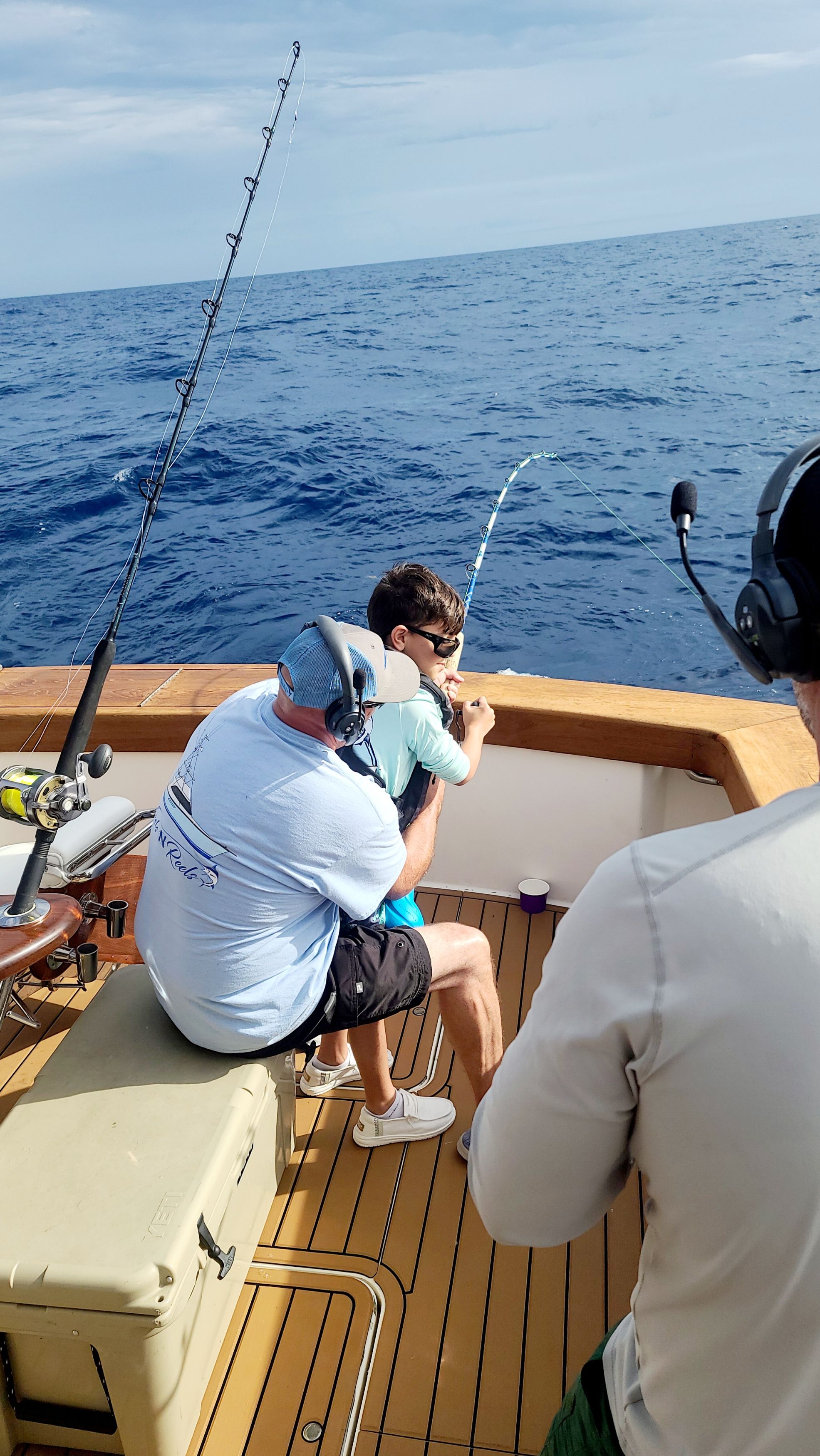 Mikey Ivester [8] hooked up a Blue Marlin at 8:30 am [winning us 1st catch and release of the day prize and points] with Mom, Dad, and the entire crew in tears early that day!  We were just proud he had no intention of 'passing the rod' whatsoever.  If you know Mikey personally, you know the tenacity of this little guy and would not be surprised! 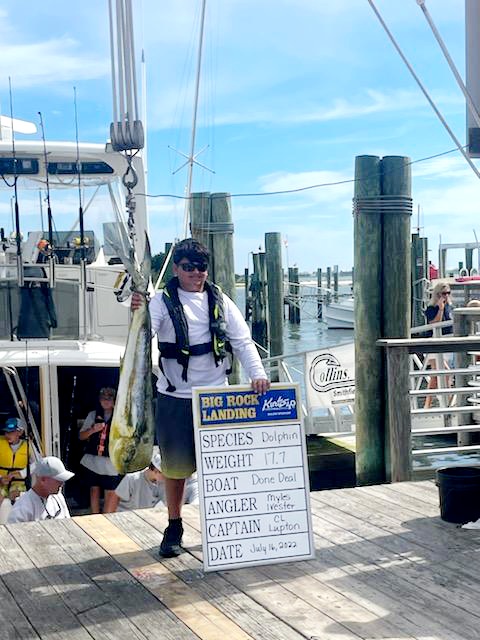 Noah Sutton [10] was next in the chair almost immediately after Mikey's 1 hour and 25-minute fight!  Noah did amazing and it was clear that our mate Paul Sutton is raising a pro!!  He effortlessly got his blue in, scoring us additional points on the last day of this tournament!

Myles Ivester, a natural angler & mate for sure, had us a beautiful Tuna and also reeled in quite the Mahi to place us in 10th place for the dolphin division!  Funny story, as the day went on and 'lines out' were upon us so soon...Myles sat patiently, in the cock pit, in the pouring down rain just waiting....for his chance to fight a Blue just like his fellow junior anglers.  One characteristic about Myles that is very apparent if you know him.  He is quiet, and gentle and can be very, very patient [sometimes].  Mom and Dad figured two billfish and a mahi was a fortunate day, so the thought of another was unlikely and unnecessary.  Before we knew it we heard the zip of another hookup and Myles hops into that fighting chair and reeled in his Blue slow and steadily.  It was a long fight, and he kept focus and faith the entire time.

Being two and a half hours offshore, we were unaware if we had won or not. All we had was a radio the captain uses, and for the record, no sonar equipment on the boats.

This crew, headed up by Captain CL Lupton, Mate Paul Sutton, and the boys' father Michael Ivester Jr.,  plus these amazing kiddos along with the rest of the crew, Mom - Meera Ivester, Cousin - Grayson Rhyne, Nanny - Klara Ogg and Besties - Ivey Link and Brent Bethune, were absolutely our very own Dream Team!

It was truly an UNFORGETTABLE tournament that will likely never happen again and we feel grateful and blessed for those few days together offshore.  The bonds that were created through this journey are immeasurable and we give all the glory to God for such an unforgettable experience. 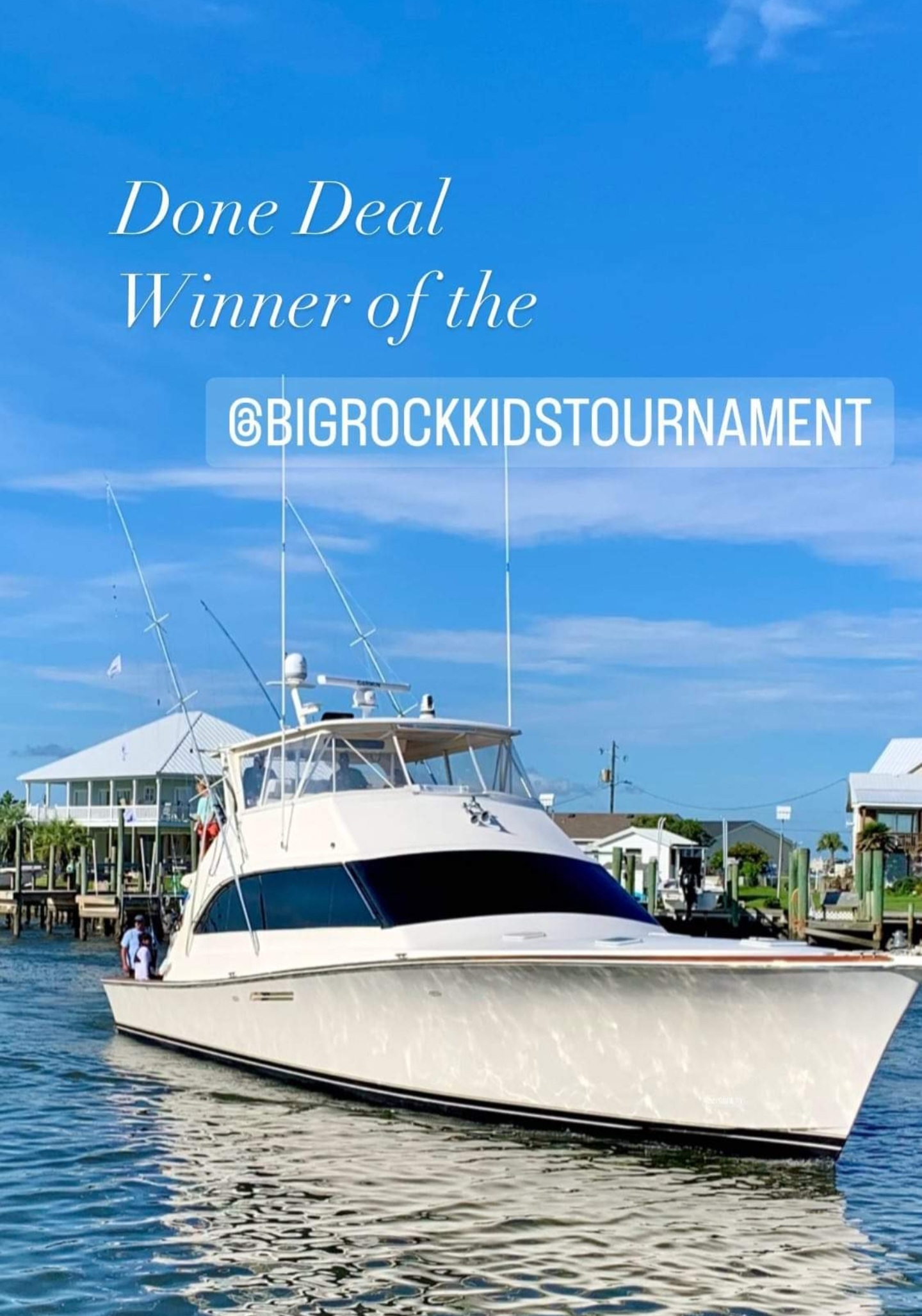 *About the Done Deal/Heels N Reels*
Interestingly, we have had a lot of unforeseen issues with this boat and have NEVER had her in the water.  We have been working on it for close to 9 months after getting her last year.  Heels N Reels, our original boat, is currently on the market and we just haven't had the time to change names not knowing if we would even be in it this season.

We ended up putting Done Deal in the water a week before the Kids Big Rock; truth be told, it was the first time we fished her.  It is amazing to us that the boys get to have this memory of being the first anglers ever to fish on it.  We believe it's a 'Done Deal' that we won't be changing her name after all!